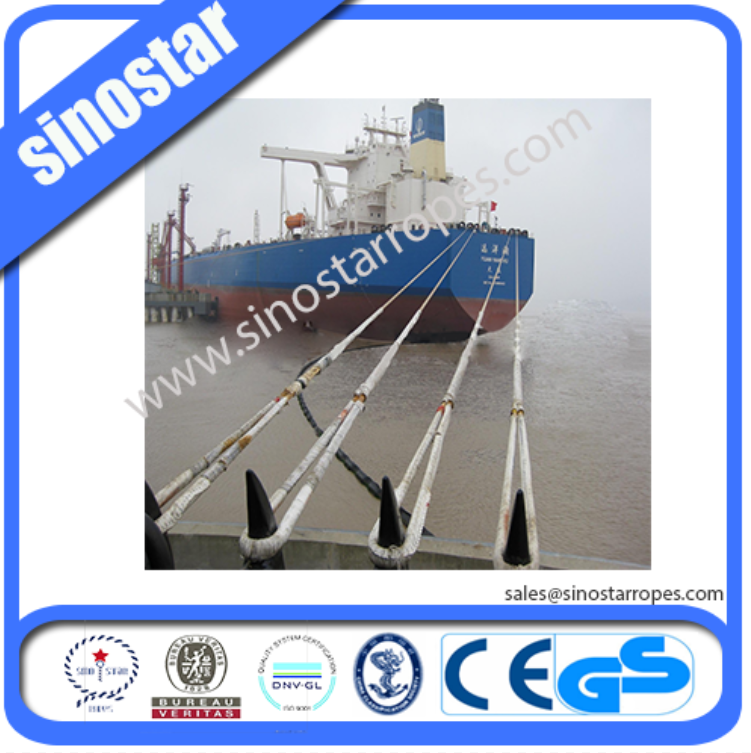 SAMSON high strength cables are used In maritime salvage, fast and effective towing with cable is an important means to improve salvage efficiency, reduce loss of personnel and property, and avoid further deterioration of dangerous events. It is of great significance to improve and encourage the morale of the professional rescue team and to enhance the fighting capacity of the professional rescue team. The rescue fleet of the north sea rescue bureau starts from the current situation of the rescue, summarizes the experience and lessons in the rescue practice, and draws lessons from the foreign advanced rescue experience of towing with cable. The special rescue tug is equipped with high strength rescue towing cable and its guide cable — dinema cable

In previous rescues, towing with cables usually used chemical fiber cables as emergency rescue towing cables. Due to the small breaking load of chemical fiber cables, the incidents of cable breaking often occur, thus losing the best rescue time and increasing the rescue cost. During typhoon no. 5 on July 5, 2002, beihai 102 broke its cables twice in a row while rescuing the liberian 13,700 ton container ship SIGRID WEHR. The ship “SIGRID WEHR” was out of control and only 20 meters away from the seawall of shidao port. If the situation is not controlled in time, it may be pushed up to the seawall by surging waves, causing serious consequences of hull damage and oil spill pollution. The first time was to use the nylon lead and towing cable with the diameter of 28mm to pull the 154mm floating rescue cable. Since the weight of the floating rescue cable increased significantly after it was immersed in water, the crew of the ship in distress was slow in pulling the cable. When the floating rescue cable was less than 1 meter from the lead hole, the lead cable was broken by the ship’s winch. Is gradually increasing because of the wind, wind, flow, and pour out, more increased the difficulty of mooring, again the second time is 28 mm chemical fiber with a diameter of the cable with cable, back-end floating heaving line connected to a diameter of 80 mm, and then connected to a diameter of 154 mm floating rescue line, finally connected to the main tug line (65 mm diameter steel wire rope), was prepared in ground anchor dragging, because the chain backward, parking control, coincided with a huge waves came, cause hull backward, main cable under the joint of towing and help is vertical rudder blade, caused by broken line again. Though the final success was achieved through renewed efforts, the malignant accident of oil spill caused by damage to the ship was avoided. However, many cable breaks affect the rescue effect, increase the chance of risky operation, and cause unnecessary losses.

When the long-distance rescue towing or cable rescue is not very urgent, the main towing cable — steel wire cable is usually directly used, which often requires the connection of the dragon beard chain, which requires professional technical requirements of the operation, most of the crew of the ship in distress is not familiar with the towing procedures. On November 19, 2000, the main engine of the freighter “yuntai 11” with a load of 3,000 tons failed near 35 ° 04’n 122 ° 38’e. When the vessel beihai 102 sent the 6-inch (48mm) dragon beard chain to the ship in distress for towing, it was cut off at the head of the pipa due to the ship’s failure to remove the connection between the dragon beard chain and the main towing cable to the ship in distress.

Although the breaking load of steel wire cable is far greater than that of chemical fiber cable, but the elongation is small, the weight is large, and the flexibility is small, causing difficulties in operation, especially for the rescue of unmanned ships in distress, the rescue tug needs to send people to board the ship in distress with the cable, it is difficult for two or three people to succeed in operation, and the operation risk is large. Dinema cable has the advantages of large breaking load, light weight, good flexibility and so on, which is very suitable for rescue towing cable, reducing the difficulty of cable operation and increasing the chance of rescue success.

On January 16, 2004, “DE xiang wheel” rescue nobody distress tanker “lida continent 18 round”, is the use of 28 mm diameter di nima cable as a heaving line, followed by 84 mm diameter di nima rope, only two sailor jumped ship in distress will easily take towing, successfully, drag it to dalian port in time to avoid a catastrophic oil spill pollution accident. The temperature was minus 13 degrees, the northwest wind was a force 6 to 7, and the deck was covered with ice water. The use of chemical fiber cable is impossible, because with a diameter of 154mm of chemical fiber cable cable difficulty is not lower than steel wire cable, a little more thin chemical fiber cable strength will be far from the requirements. On December 6, 2003, the 27,000-ton “xinhua river” ship lost control near the brother shanshui road and drifted southward, in a critical condition. Beihai rescue 108 also USES dinema cables to quickly bring the cables up and haul them to safe waters. At that time, if the use of wire rope, may be delayed due to the difficulty of the operation of the time and serious consequences such as stranding or reef; At that time, if the use of chemical fiber cable, there may be a number of broken cable accident, will still delay the rescue time and cause serious consequences.

The rescue towing cable is one of the necessary rescue emergency rigging for every special rescue ship, and it is the most important rigging. In the salvage operation, towing salvage accounts for almost 90%, the performance of the salvage towing cable is directly related to the success of the rescue, and shortening the cable time is a key step to grasp the opportunity and reduce the loss of personnel and property. This requires the rescue towing cable and lead cable to meet the actual needs of the rescue operation, light, flexible, easy to operate. Ordinary steel wire and cable hardness, weight, smooth sea conditions under the operation of artificial cable (in most cases, the ship in distress, the cable mechanical equipment is damaged), is also very difficult, bad sea conditions, the difficulty of cable operation is difficult to imagine, the success rate is very low, so it will greatly reduce the chance of rescue success. Ordinary synthetic cable might have been able to carry the main towing cable, but because of its low strength and the frequent occurrence of cable breaks, the result was a failure. Under the new situation, the overall goal of the rescue system is “capable personnel, skilled, well-equipped, critical moment to play a key role”. “Well-equipped” became the work goal that we had to accomplish. The rescue fleet of the north sea bureau actively investigated and fully demonstrated, and found a kind of high-strength cable suitable for rescue operations — dinema cable.

Through the rescue practice of beihai rescue 108 and dexiang, the necessity of equipped with high-strength rescue towing cable and its guide cable — dinema cable is tested. The special salvage tug belonging to the salvage fleet is equipped with cables with diameter of 28mm and diameter of 84mm, 2 g6e)

With a diameter of 28mm, the lead cable is light in weight and tight in hand, suitable for manual operation, and its strength is up to 454KN and 454KN. The 72mm breaking load is 2840kn, the 64mm diameter is 2300KN, and the 84mm diameter is 4500KN, which is greater than the breaking load of the same diameter steel wire cable.

Dinema cable is made of polymer fiber cable material imported from the Netherlands. It is known as Dyneema in English. It has the advantages of high breaking load, light weight, low elongation, good seawater and chemical resistance.